Moles and Birthmarks (Including Melanocytic Nevi) with Pictures

Read on to learn about common types of moles and birthmarks with normal benign mole pictures.

This article was created by Dr Nitin Shori

Rates of skin cancer are rising across the world. Although treatments are advancing, late diagnosis continues to carry a poor prognosis. Early detection of skin cancers is therefore as vital as ever. Almost all of us have several skin lesions including moles (often known as melanocytic nevi by doctors) and will develop further ones over time. 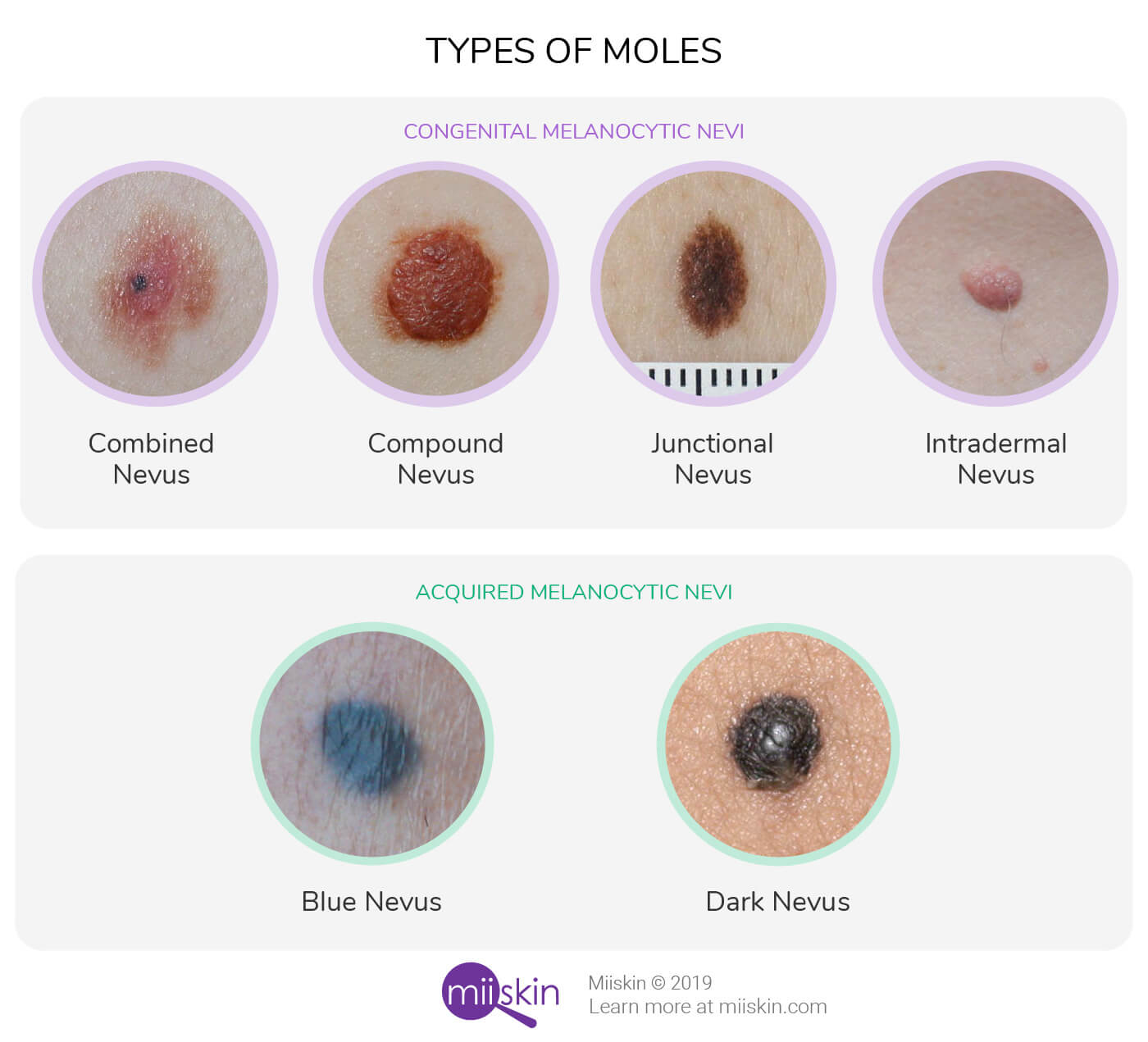 Removal of every normal mole on every individual is not practical or appropriate and good awareness of the alarm signs and frequent review form the mainstay of management. This article will educate the reader to be able to answer, ‘What does a mole look like?’ and show pictures of moles to help.

Traits: Normal Benign Moles (on the body, face and scalp)

In this article, we will illustrate the common types of mole found on the body. Patients often wonder what do normal moles look like and using multiple pictures of moles, we hope to raise awareness of the appearance of normal moles and the variations that can occur.

In medical terms, a normal mole is a benign mole. This means it carries no harm and is not cancerous in any way. The vast majority of moles are benign moles. We will also cover the changes in previously benign moles that require assessment by a doctor and explain commonly used terms such as melanocytic naevus.

Moles can appear on any part of the body. They are known by many different colloquialisms but the medical term is a melanocytic naevus. 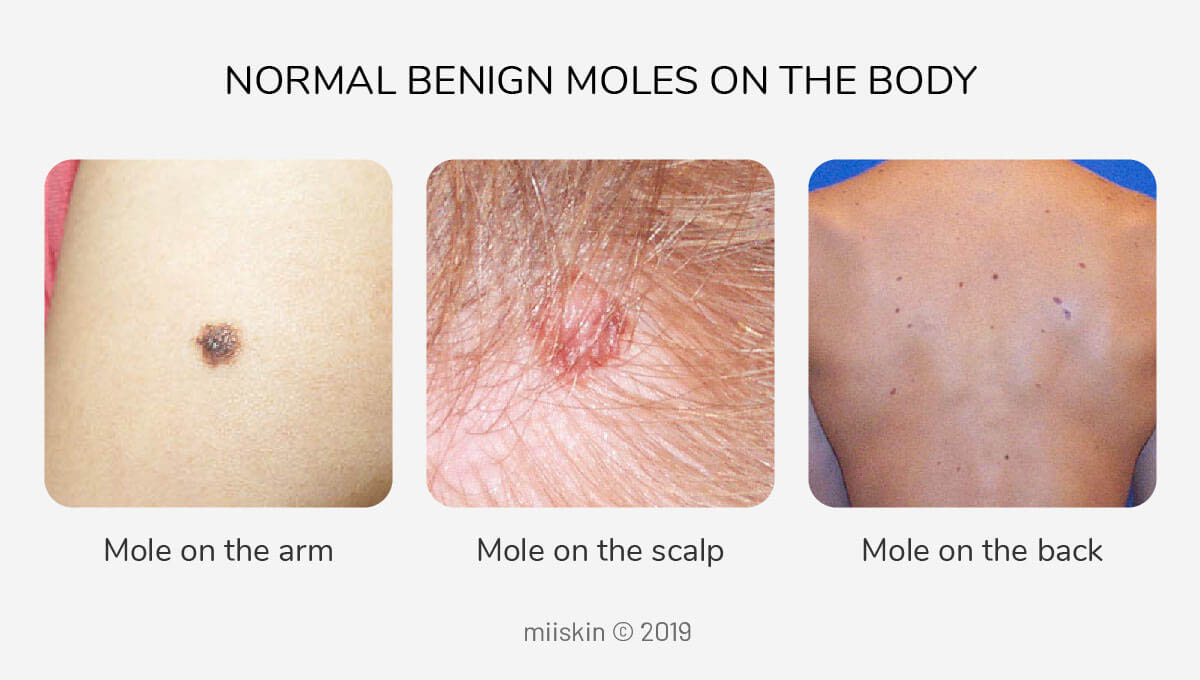 A mole that is dark in colour is called a pigmented naevus. The more pigmented a naevus is, the more likely a patient is to present with it for review.

Moles can be a large range of colours ranging from a light skin colour to a dark black. The following section contains mole images and skin mole pictures for the most common moles. Spotting a subtle skin change is tricky. Use Miiskin to keep track.

Types of Common, Healthy Moles and Birthmarks with Images

This section contains multiple examples of what normal moles (melanocytic naevi) look like. Some of the examples are moles on the body. All moles pictured are relatively common moles and within the scope of this article, they are all healthy moles.

There are several ways to classify melanocytic naevi (moles). One common way is by the timing at which the mole appears.

A congenital melanocytic nevus is an overgrowth of colour producing cells in the skin (melanocytes). Congenital means that this skin lesion is present at birth or develops shortly after birth.

Congenital melanocystic naevi are lesions present from in and around birth. They are often considered to be birthmarks. Below are pictures of moles which are all pictures of normal moles.

Compound nevi consist of a flat area with a central raised patch. 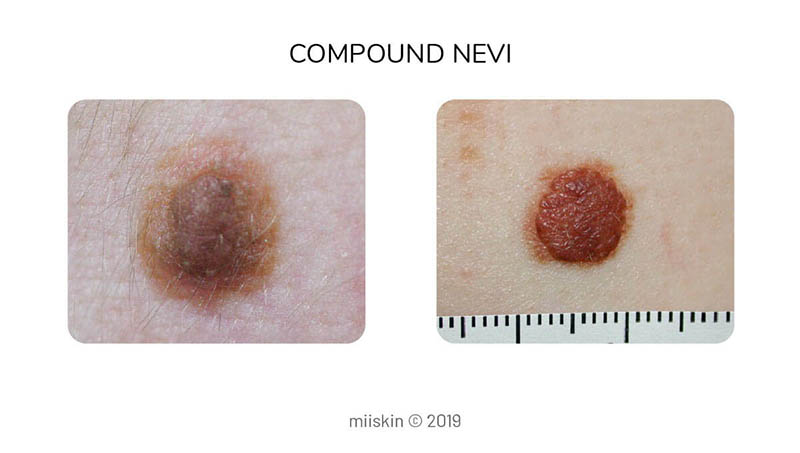 Intradermal nevus is a skin coloured raised lesion which is smooth on the surface. 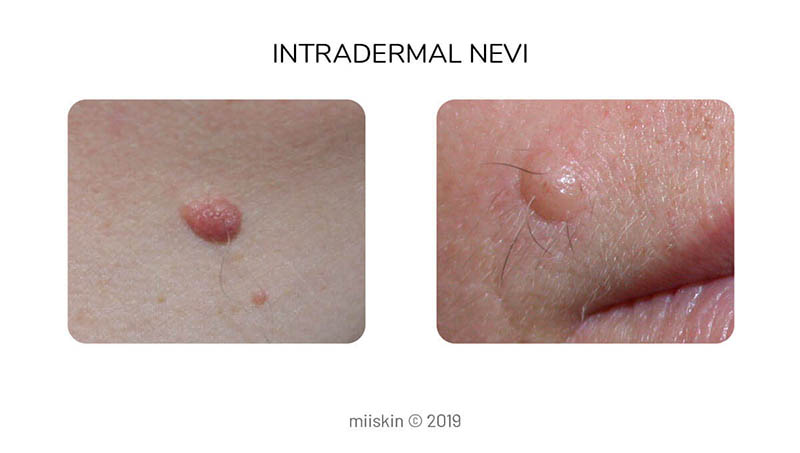 Combined nevus consists of one naevus within another; usually a compound naevus combined with a central blue naevus. 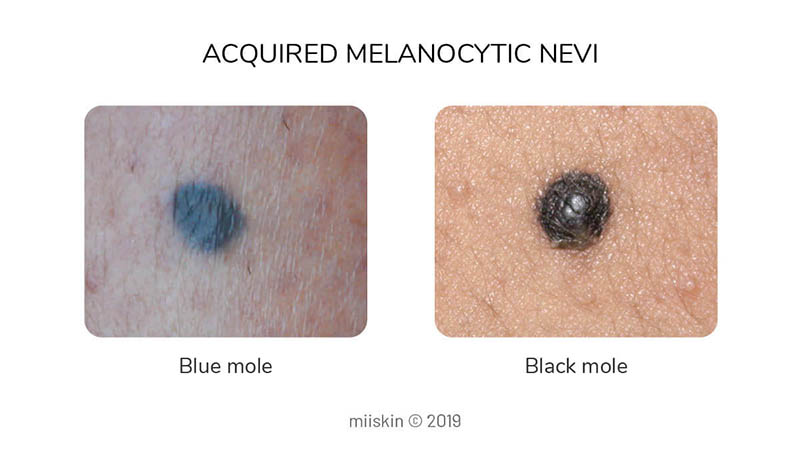 The list of moles above is not comprehensive. There is another type of moles, atypical moles which are uncommon and these are discussed in this Atypical moles article.

Do Moles Change over Time?

Once a mole has appeared, it is very difficult to predict how it might change over time. With the majority of moles, very little change will occur and the appearance will remain largely unaltered.

Any mole changes such as an increase in size or a change of colour can be seen as a risk of potential skin cancer and should prompt a visit to the doctor. Many of us will have multiple moles on various parts of our bodies and some people have a strong tendency to develop large numbers of moles or other skin changes.

What Changes in Moles Should You Look out For?

It is vital to know which skin moles to worry about and there are many different types of changes. The most important type of skin lesion to watch out for is melanoma. This can be aggressive skin cancer and can be fatal in advanced cases. It is vital therefore to know about melanoma signs and also to be aware of skin cancer symptoms such as pain or itching.

Information about melanoma can be found here. 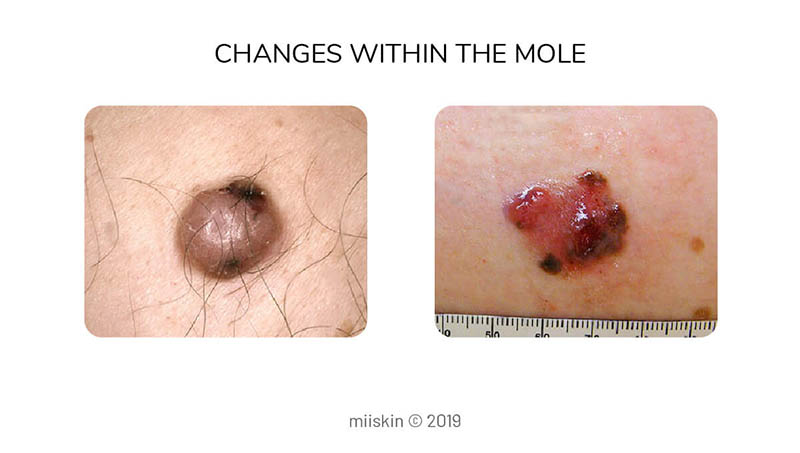 A subset of moles will get larger or universally darker and these are important signs to watch out for. Much of the time, these changes will not be of concern but for safety and reassurance, they are worth getting checked.

A mole that becomes crusty or bleeds should be reviewed as the visual changes can be markers of underlying changes within the mole. Moles are rarely painful but can often become itchy. Both can be skin cancer symptoms and reasons for review.

Changes to take extra care with include a change in the shape of a mole or a change in colour of part of the mole. These warrant review by a doctor. Again they are often harmless changes but they do carry higher risk and must be checked.

A great way of remembering how to check a mole visually is the ABCDE rule. This helps us look for melanoma signs and assess melanoma vs non-cancerous moles.

The Importance of Checking and Monitoring Your Moles

Once a mole has appeared, many of us will not check it again unless we get symptoms that bother us in some way such as itching or bleeding. This increases the risk that any changes will be detected late.

The same is true after a mole has been checked by a doctor. Patients will often feel reassured and not continue to monitor the mole. Again, this increases the risk of late detection. A doctor can only give you an opinion on how a mole looks at that point in time, like a photo. Ongoing monitoring of all moles is important, especially in sun-exposed areas. A full skin check including skin mapping should be done at regular intervals looking for any new lesions or changes. The Miiskin app can help with an initial mole check and ongoing monitoring of your skin.

Read more about the Miiskin app.

What signs on my skin should I be aware of?

Can a smartphone app diagnose me for skin cancer?

What are the early signs of melanoma?

Am I at higher risk of getting melanoma skin cancer?

Monitor your moles for changes with Miiskin Premium

You can try Miiskin Premium 30 days for free. Don't worry, if you cancel within the trial period you won't be charged.